The Most Popular Jobs for Millennials. Market research analyst in the Top 10. 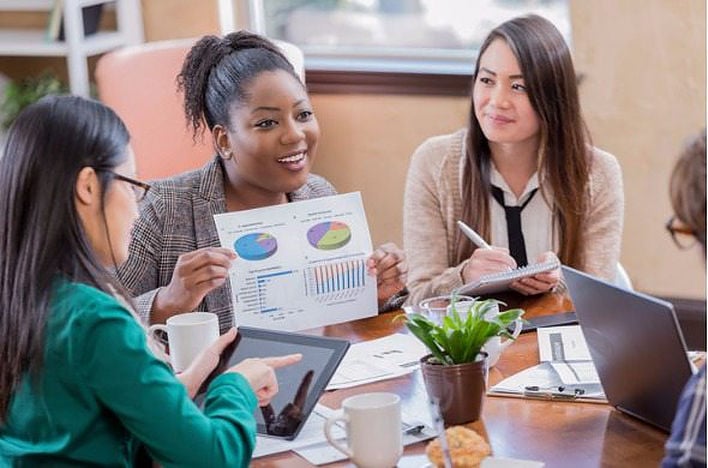 The first cohort of millennials entered the workforce around the time of the Great Recession, when the economy was sputtering. Combine that fact with the constantly changing make-up of the modern economy and you have a uniquely difficult employment situation for working millennials. Below we look at the data to see how millennials have responded and to find the most popular jobs for millennials.

In order to find the most millennial-dominated jobs, we looked at Bureau of Labor Statistics’ Current Population Survey. We looked at data to find where millennials made up the highest percentage of employed workers in each occupation. For the purposes of this study, we defined millennials as those between the ages of 25 and 34 in 2016. Check out the data and methodology below to see where we got our data and how we put it together.

This profession has the highest rate of millennials among its ranks (44%) and the median statistician is 35 years old. Of the 74,000 statisticians in the country, 33,000 are between the ages of 25 and 34.

This is one occupation which millennials are well placed to succeed in. The advent of big data availability and new technology to analyze it has made being a statistician a fast growing and lucrative occupation.

The second occupation which is most likely to be filled by a millennial is bartending. There are about 454,000 bartenders in the U.S., 190,000 of whom are between the age of 25 and 34. Bartenders are not particularly well paid, the median bartender earns only $20,800 per year.

That will make it hard for millennial bartenders to save up to buy a house or save for retirement. But there are some areas where bartenders do earn more. In the Kahului-Wailuku-Lahaina area of Hawaii, for example, the average bartender earns about $45,500 per year.

This is a great career option for millennials and non-millennials alike. The average financial analyst makes almost $82,000 per year or about $39 per hour. The BLS also expects this occupation to grow faster than average over the coming years.

These are the people who plan advertising policies or programs to increase business for a company. They are typically paid well. The average advertising and promotions manager makes over six figures.

About 40% of the 67,000 advertising and promotions managers are millennials. To be hired for this role you typically need multiple years of experience and at least a bachelor’s degree.

There are about 194,000 EMTs and paramedics in the U.S. About 38%, or 75,000 of them, are between the ages of 25 and 34. To become an EMT you will need a special certification but no specific on-the-job training. The BLS expects this occupation to grow faster than average.

Because of the stressful nature of this occupation, it is perhaps not surprising that’s it’s mostly done by younger people. The BLS describes this occupation as “physically strenuous” and “sometimes involving life-or-death situations”.

Physician assistant is a great option for someone who wants to work in the medical field but does not want to take on all the student debt that may be required to become a doctor. To become a physician’s assistant, you will need at least a master’s degree but you could earn upwards of $101,000 per year.

The median physician’s assistant is 39 years old, and about 38% of them are millennials. In general the healthcare field is one of the fastest growing. This is especially true for occupations like nurses or doctors.

The internet is a key component in the modern economy. Many millennials have taken advantage of the new internet economy and become web developers. In fact, the data suggests the stereotype of the young web developer is true. Just under 38% of all web developers are between the ages of 25 and 34.

If we include anyone under the age of 34 that number jumps to 46%. The average age for web developer is 37.

This group of individuals conducts research on the feasibility of products in local and national markets. There are about 300,000 people employed in this occupation across the country. Market research analysts tend to be found in the big cities like New York, Los Angeles and Washington, D.C. About 37% of market research analysts are millennials.

Firefighting, like paramedics, is a young person’s occupation. This work can be dangerous and physically demanding. The median firefighter is 38 years old. 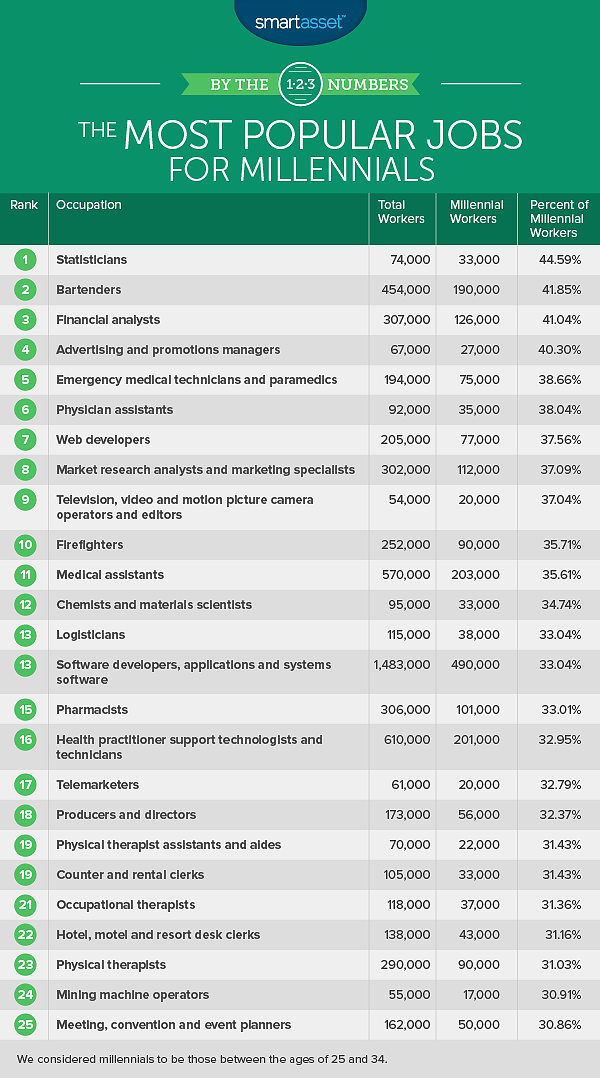 Tips for Making a Career Change

As our data showed there can be a very large divergence between the types of jobs millennials do. Some pay over six figures, while others pay barely $20,000. Here are some tips for moving from one to the other.

Questions about our study? Contact us at press@smartasset.com.
Photo credit: ©iStock.com/Steve Debenport.

DEREK MILLER, CEPF® Derek Miller is a graduate of the University of Edinburgh where he studied economics. He is passionate about using data to help people make better financial decisions. Derek is a Certified Educator in Personal Finance® (CEPF®) and a member of the Society of American Business Editors and Writers. He is a data journalist whose expertise is in finding the stories within the numbers. Derek's writing has been featured on Yahoo, AOL, and Huffington Post. He believes the biggest financial mistake people make is waiting too late to save for retirement and missing out on the wonders of compounding interest. Derek lives in Brooklyn.

Why is the Hemato-Oncology Market Complex for Market Researchers?

The hematology oncology market is one of the most rapidly developing, with over sixty oncology...

5 Benefits of Syndicated Research in the Hematology Oncology Market

In an increasingly competitive landscape, pharmaceutical companies are required to assess the...